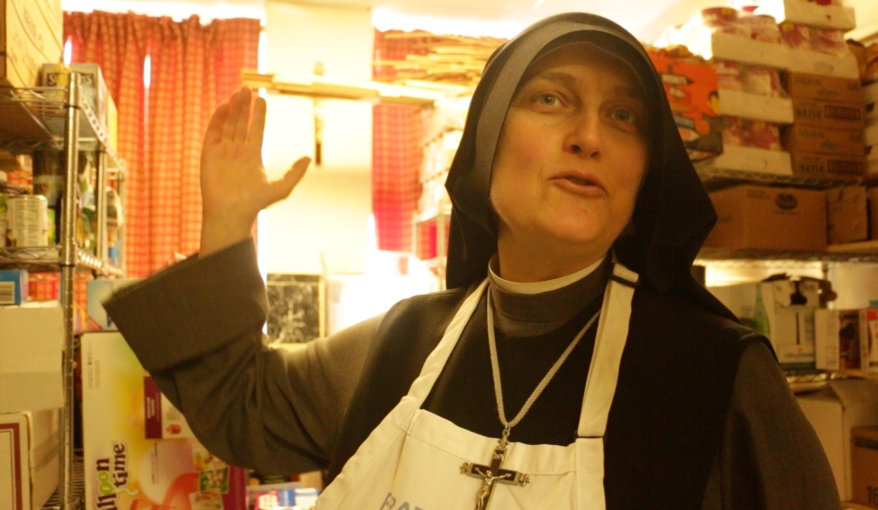 Sister Mary Benedict stands in the cramped larder of the soup kitchen run by the Fraternite Notre Dame nuns at 54 Turk St. in the Tenderloin. The sisters have less than a year to find a new place even after receiving financial help from celebrity Tony Robbins in mid-February. Photo by Ted Andersen

A group of nuns who run a soup kitchen for the homeless in the Tenderloin neighborhood found themselves last month in the middle of a predicament not so different from the plights of those they serve.

The Fraternite Notre Dame nuns have run the haven for the homeless and destitute at 54 Turk Street for eight years. The soup kitchen is open three days a week — Monday through Wednesday — and can draw as many as three hundred people per meal. To pay for both rent and supplies for the meals, the sisters bake French pastries late at night and sell them at a farmers’ market in San Francisco’s Crocker Galleria. Even though their margins are small, they have been able to make it work for nearly a decade.

But early this year, landlord Nick Patel raised their rent 60 percent, from $3,465 to $5,500. The sisters couldn’t pay the new amount and received a three-day notice in early February. News of the possible closure rattled longtime volunteers and patrons.

“It helps me a bunch because I don’t have a cooking facility,” said Caroline Jones, a 30-year resident of the Tenderloin who was one of the first people to come to the kitchen when it opened. “I have a lot of friends, people who come from the hotels around here and stuff. They’re living in the SROs and they don’t have places to cook either and they come here also. And it would really hurt us real bad if they close this place. We really need it.”

Joey Chapman, who has volunteered as doorman at the soup kitchen for seven years, said the loss of the services would be a bitter pill to swallow.

“Well if they close this place … it’s hard to say what’s going to happen,” Chapman said. “People have to go somewhere else to eat. It’s pretty tough.”

More than a half dozen TV and print outlets heard of the impending closure and reported on the nuns until the story went viral. That’s when their luck began to change. Enter author and inspirational speaker Tony Robbins. Robbins caught wind of their debacle and decided to pay a highly publicized visit. He told the nuns he would give them $25,000 immediately with the assurance of $25,000 more to come in the near future.

“It was very helpful, very surprising, very emotional, very oh my God!” said Sister Mary Valerie. “He listened to everything we were telling him and he understood what struggling was here. In a few minutes he understood a lot.”

Robbins had his lawyer speak to the landlord, who changed his mind amid the onslaught of negative publicity. Instead of eviction, Patel decided to allow the nuns to stay one more year at their normal rent. Patel did not return repeated phone calls.

So, Tony Robbins saved the nuns and they went on to live happily ever after in Mid-Market San Francisco. Or did they? There was one small problem: there are no happy endings for renters in the worst housing markets in the country.

The clock is now ticking for the sisters who are actively looking for a place to buy. But options for housing are so pricey that what Robbins gave would only make a small dent. The sisters are also exploring other options such as sharing a small church space or storefront with another organization.

Another problem for two of the nuns, Sister Mary Benedict and Sister Mary of the Angels, is that they live in the back of the soup kitchen, meaning they will also have to find new accommodations. The median price for a two-bedroom apartment is now at about $5,000 in San Francisco, the most expensive rate in the country.

While that block of Turk Street has been run down for decades and historically cheaper than other parts of the city, there may be some development in the near future. Across the street from the kitchen, there have been talks about redeveloping 950 Market St. into a hotel with an upscale focus that could further gentrify the area.

“We know this area is changing because they want to build a nice condominium in the front of the soup kitchen. A new building with a hotel for rich people,” said Sister Mary Benedict. “So we know that they don’t want the poor people here anymore which is probably why they are raising the rent so high.”

What will happen to the soup kitchen? All that is known is that it is slated to move within the next year. The sisters said that they would continue their service to the poor even if it meant leaving the city, something they are desperately trying to avoid.

“It’s more than a problem because our landlord gave us authority to stay one more year, that’s it,” she said. “And a year goes very fast here. So this is very much an emergency.”